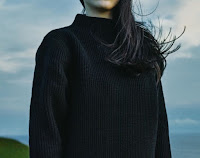 Written by Haydn Davis.
Tokyo - Technical apparel brand Goldwin and biomaterial specialist Spiber have developed the world's first knitted garment made with Brewed Protein, a biopolymer whose plant-based microbial fermentation process makes it well-positioned to deliver significant contributions to animal- and plastic-free initiatives in a range of fields and industries.
Called simply The Sweater, the development is described as a milestone in Goldwin and Spiber's shared mission to reduce the fashion industry's impact on the environment by replacing traditional, petrochemical-based materials and production methods with innovative, bio based solutions.
Designed to emulate a traditional ski sweater, this coarse gauge knit and twisted yarn delivers an ultra soft and comfortable feel in a blend of 70 per cent wool and 30 per cent Brewed Protein. The latter is produced through a microbial fermentation process, which utilizes plant-based feedstock such as sugars as its primary resource, resulting in materials that are said to be well-positioned to contribute significantly to animal-free and plastic-free initiatives in a range of fields, such as the apparel and automotive industries.
The Sweater is Goldwin and Spiber's first Brewed Protein garment brought to market in the US. In 2019, The North Face Japan, which is operated by Goldwin Inc., collaborated with Spiber to release the Moon Parka, the world's first outerwear jacket featuring microbially-produced fabric.
Designed primarily as a conceptual garment, the parka was available for sale only in Japan and was produced in highly limited quantities. Goldwin and Spiber's partnership began in 2015, but The Sweater marks the beginning of a new phase in the partnership, which the companies call "Vision Quest," a project that unites partners around the world in the quest for a better future.
"Mankind has continued to evolve the sweater via the use of technology and knowledge throughout history and it is now essential winter wear," said Takao Watanabe, Goldwin's Head of Development. "The sweater has remained loved by many and its design has also remained largely unchanged since the original sweater first came into existence. The reason why it has played such a big role in the cultures and histories of people all over the world is due to the diverse and versatile animal fibers and the sweater knits that use these to their full potential."
Technical.
Goldwin is an international technical apparel brand with products ranging from high performance skiwear, lifestyle apparel, activewear, and outdoor apparel.
Spiber Inc., established in September 2007, is a Japanese biotechnology venture engaged in the development of innovative biopolymer materials known as Brewed Protein.
Spiber is currently engaged in numerous initiatives to scale up production of its polymers, with construction of its first overseas plant currently underway in Thailand. Scheduled to begin commercial operation in 2021, the plant is anticipated to be the largest structural protein mass-production facility in the world. In October 2020, Spiber also announced a partnership with Archer-Daniels-Midland Company, the world's premier agricultural origination and processing company, towards mass-production of Brewed Protein polymers in the US.
The Sweater is a highly exclusive item which, with an US$800 price tag, will be produced in limited quantities. From November 9, 8 am EST to November 29, 12 am EST, anyone in 11 countries (Japan, US, Germany, Denmark, France, Italy, Portugal, Spain, UK, Sweden, and the Netherlands) can enter an online lottery system that will determine who receives the opportunity to purchase The Sweater. On November 30, 2020, winners will be selected randomly and notified via email of their eligibility to purchase The Sweater. Beginning on December 25, 2020, The Sweater will be shipped to those in the 11 countries who purchased it.
"The Sweater was devised while probing the origins of the supposed original form of these sweaters and what of this will persist into the future," added Watanabe. "Furthermore, black is a color that is made by mixing all other colors and is also said to be the original color. These sweaters that have been with us from the beginning will lead us to the future through modern-day technology. This single black piece of apparel that signifies both the past and the future."
Source.
Posted by S K G Rao at 6:10 PM