[ Succes is attained not in rising above the society but rising with it.]

Shri.M.Somappa a Well known leading industrialist of Rayalaseema and known to every senior textile technocrat in India was the father, of India's first Weavers Co-Operative society that started handloom fabric production and sales in the year 1938. Son of a Master Weaver he took up the task of distressed hand loom weavers who faced acute shortage of spun yarn on hanks. The Govt of India had to force the private Textile Mills to produce part of their market yarn on hanks to solve this yarn shortage faced by the hand loom, weavers more than once.
Textile Mills who were not interested in the production of hank yarn did something else. They purchased hank yarn of other mills and reported it sold or otherwise as to the quota of Hank Yarn Obligation as sold, to the govt authorities. The mills had to report yarn sold and not manufactured. Govt could not increase the yarn production. As excess yarn obligation was sold by those mills to other mills which never reeled any yarn. Reeling of yarn remained the same as earlier and still, there was yarn shortage.

Shri.M.Somappa had visualized that yarn shortage would result in large scale job loses may again crop up, he planed to help weavers so, he had to help the weavers. He took the bold step to set up a spinning mill in Adoni known as 'Rayalaseema Mills Ltd' in 1945. 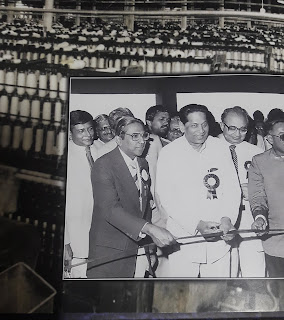 This Mill has completed 75 years and is still running as one of the best mills in Andhra Pradesh.
A 100% Export Oriented Mill the first of it's kind in India was started by Mr.M.Somappa is another feather in his cap of a Textile Mill in Andhra Pradesh.. 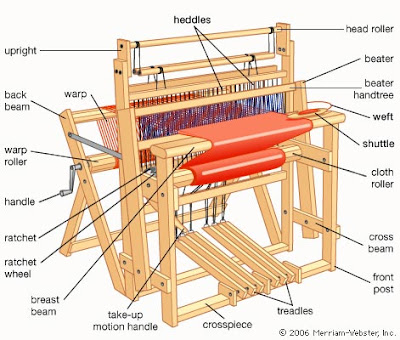 Though we can enjoy weaving cloth on a handloom, hand made machine, we cannot get these looms that are 'Made in India'.and sold online. If Govt of India makes it mandatory to all Apartment builders to have a Shed exclusively made for the Apartments built by them called as a CITY after their Names and if they can build huge pools for swimming. Will it not be better, if they could help and build a shed to install 10 handlooms to the senior citizens who will work in these sheds freely and that would make them productive people of the country because of my experience as a textile man. I recently went to a party given by a New Apartment owner who was celebrating house warming function for his new Flat one, amidst 1500 Apartments and saw huge areas built which served hardly 50 persons and was of no useful utilization of the cost and labour that went into such constructions and was permanent underutilised construction.

.
We do not have persons like Shri.M.Somappa a "Padma Shree" Awardee in such activities. If the builders are given some incentive for such enterprising builders, they will increase. We do have them but we don's have such persons who can think of how they can persuade those reputed big builders.

The new chief minister of Andhra Pradesh has shown good interest about the plight of Hand Loom Weavers and has given financial help to many families of handloom weavers who are presently having handloom weaving hand made machines shown in the picture below.


The Chief Minister of Andhra Pradesh has announced that each family of Handloom weavers will get ₹24,000 per year under ‘Nethanna Nestham’ on Saturday and launched ‘Nethanna Nestham’ at Dharmavaram of Anantapur district. The scheme aims to extend an aid of ₹24,000 every year for each handloom weaver family that is currently running a loom.


In spite of our Prime Minister telling us that every family must buy one handloom fabric, how many have purchased I do not know. Regions, villages, and communities throughout India have unique weaving traditions with distinct customs and patterns. Depending on the location, textiles may be woven from cotton, wool, or silk. Today, weaving remains important to India's economy with roughly 4.3 million people involved.
Do we have a person just to look after our country's proud weavers?
We have a person to look after Fisher Folk how lucky they are?

Our Minister for Textile is a busy politician I am not fortunate to hear her talk on Handloom Weavers.
Our previous Textile Minister's have closed 88 mills paying all their dues up their retirement and those workmen are on the street selling coconuts or as hawkers. Only 23 textile mills are working making no profit. The total loss made is not known.

In one mill in south, I had worked as General Manager which was running on profit. Here many of the workers who had refused to go home (VRS) taking all their dues till retirement and are squatting inside the mills at present. This was recently informed to me by the Top Executive who recently retired from NTC.(Tamil Nadu). This mill was having a reputition as "University Of Labour Unions".