Held every four years since 1951, ITMA has reinforced its reputation as the worlds leading textile and garment technology exhibition. The exhibition space for its 18th showcase to be held in Barcelona has been fully booked by the application deadline of April 6th,2018.


According to CEMATEX, the European Committee of Textile Machinery Manufacturers, over 1,500 companies from 45 countries have applied to take part in ITMA 2019. Space booked already totals more than 110,000 square metres net. As applications continue to stream in, plans are underway to expand the exhibition to the entire Barcelona Gran Via venue.


Mr Fritz P. Mayer, President of CEMATEX, said "We are grateful for the vote of confidence from the industry. It shows that ITMA is the launch pad of choice for the latest technologies from around the world. Interest in ITMA 2019 is extremely strong and we have received more applications at an earlier date compared with previous editions. We continue to welcome new applications, especially manufacturers who are launching new products, as they will help to make ITMA  2019 on even more vibrant sourcing platform for our visitors

Applications from CEMATEX countries have booked 65% of the space. The top countries are Italy, Germany, and Spain. Highlighting the positive market sentiments of the textile machinery manufacturers from the rest of the world.applicants from Turkey. India and China take the top spots in terms of space applied. The Top sectors are finishing (25% percent ), Spinning ( 14% ) printing and weaving ( 12% ) and Knitting ( 11% )

With the strong demand for space, ITMA 2019 is expected to feature a showcase of more than 115,000 sq meters Net. With the participation of some 1,600 exhibitors when the exhibition opens.

ITMA 2019 will be held from June 20th to 26th at Fira de Barcelona, Gran Via venue. The exhibition themed "Innovating the world of textiles, will show the latest technologies and sustainable solutions for the entire textile and garment manufacturing value chain as well as fibres, yarns, and fabrics.
Republished from The Textile Magazine,
Chennai - 600017,  April 2018, Volume:.59 Issue 6


Air Fare from Bangalore to Barcelona and back Rs.85,000/- per adult in economy class. 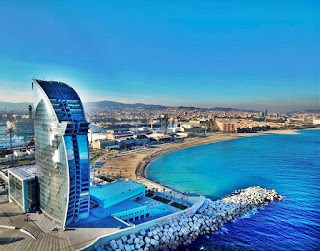 Barcelona is a city in Spain. It is the capital and largest city of Catalonia, as well as the second most populous municipality of Spain. With a population of 1.6 million within city limits, its urban area extends to numerous neighbouring municipalities within the Province of Barcelona and is home to around 4.8 million people, making it the sixth most populous urban area in the European Union after Paris, London, Madrid, the Ruhr area and Milan. It is the largest metropolis on the Mediterranean Sea, located on the coast between the mouths of the rivers Llobregat and Besòs, and bounded to the west by the Serra de Collserola mountain range, the tallest peak of which is 512 metres high.


If Your Hotel is nearer to ITMA Exhibition grounds which  Fira de Barcelona, Gran Via venue.( Where ever is the Exhibition I would stay here it looks great.) The hotel says it is between Plaza Catalunya and Passeig de Gràcia, and just a minute away from the Ramblas, in the centre of Barcelona, Hotel Jazz is the best way to get to know the whole city.


You need VISA before you buy your ticket contact SPAIN embassy and get to know the documents and other requirements to get your VISAand buy your Air ticket. You need to show hotel reservation, ITR forms for 6 years perhaps and marriage certificate and birth certificates of your children, You may be able to get online TOURIST VISA