[ Technical Textiles - Garware 'Out of the 'Net'] 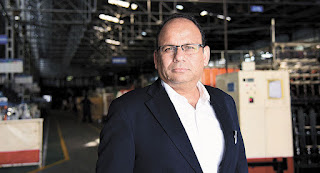 Sometimes when years of experience and deeper insights fail to propel growth, an outsider’s fresh perspective can bring a wonderful change. For Pune-based Garware Wall Ropes (GWRL), a fishing and sports net and technical textiles manufacturer that had for long been looking for a turnaround, such an outsider was Shujaul Rehman, who was brought in as chief operating officer (COO) in 2012. Although Rehman knew little about the business, his experience in managing businesses far outweighed his inexperience in the specialised trade. Having worked with leading corporate such as HCL, Hewlett Packard, Apollo Tyres, Marico Industries and Cadbury India, he knew what to do.

Three years later, the 40-year old company, which was caught in a web of slow or no growth for several years, is in fine fettle. Over the past three years, an enthusiastic young management led by a young chairman and managing director and a professional team headed by Rehman has capitalised on the synergy between inherent capabilities and innovative ideas and brought about a paradigm shift. The company has not only enhanced its research and development capabilities, it is also exploring new opportunities in emerging markets.
Today, Garware Wall Ropes is back in the limelight. Over the past three years, the company has posted record growth in revenue and profits, and as a result, its shares have seen a multi-fold surge in their price. With 61 per cent jump in net profit in fiscal 2015, it outperformed the Sensex by 12 times with a 572 per cent appreciation between 2012 and 2015. In those three years, the Sensex grew only 40.2 per cent.
“When we look things from the perspective of an outsider, we get different ideas, which is often not possible when we are deeply inside,” says Rehman, a sales and marketing veteran of 22 years with experience in various unrelated industries.
"Professional managers have been spearheading the day-to-day running of the company for many years now. In selecting the right team members for the future, sectors in which a person has worked earlier, in our opinion, are less important than the values that person brings to the table,” says Vayu R. Garware, chairman and managing director.
Founded in 1976 by late B.D. Garware, GWRL focused mainly on fisheries and allied sectors in the domestic market. Although son Ramesh started GWRL’s transformation, it is the third generation that is making waves in the industry. It is broadening the focus to agriculture, aquaculture and more sophisticated geo-synthetics and technical textile.
The company today boasts of nearly 70 per cent share in the global fish net market, having put its past firmly behind. It was just a few years ago when it lost huge opportunities as it could not fully leverage its potential on the export front, especially in the US and European markets. It also suffered from supply issues in the domestic market, which led to a drop in its market share. For several years, the revenue remained below Rs 500 crore.
However, things have only improved since 2012 under the leadership of chairman Vayu Garware. Today, the company is targeting a revenue of Rs 1,000 crore by the next fiscal — a goal mainly driven by the growing demand for new business segments including geosynthetics, agriculture and aqua.
In FY14-15, Garware posted revenues of Rs 785 crore, 55 per cent of which came from exports and the rest from the domestic market. The growth continued in the current fiscal with the net profit growing in the first two quarters by 15 per cent and 42 per cent, respectively.
“The diversification into more application areas is part of our strategic growth initiatives. Our senior management leadership (SML) team meets annually for three to four days to chart out the growth strategy for a 3-5 year horizon and flesh out the enablers for the same,” says Garware.
According to Garware, GWRL’s foray into protected cultivation solutions was a result of one of these SML meets. Today, this segment is posting good growth and has tremendous potential in the years ahead, he says.

FY12-13 was a crucial year for the company. Although the global market began to show signs of revival after the 2008 crisis, the domestic market, which was GWRL’s key revenue contributor, remained in a slump. The slack demand continued across major industry segments in India and the inflationary pressures on costs remained significant.
“The year was one of opportunities and challenges,” Garware said in his annual address to shareholders in March 2013. “The company addressed this situation through a combination of well-planned strategies. Adopting the principles of lean manufacturing and value engineering, we made focused efforts to improve efficiencies and profitability. Internally, we worked to increase throughput and reduce consumption of materials, power and fuel,” he added.
The company worked on a war-footing to expand its customer base, widen distribution reach, secure repeat orders from existing customers and improve the delivery lead time and responsiveness to customer feedback. Its research and development team worked very hard on translating customer needs into innovative products. The results were excellent.
Garware successfully launched several new products that redefined paradigms and added value in application sectors such as aquaculture, deep-sea fishing, high-value agriculture and coated fabrics.
The company’s success has restored faith of industry experts in its capabilities.
“Going forward, we expect the company to continue reporting strong numbers on the back of higher anticipated demand for aquaculture and sports products globally and also with the company tapping new geographies,” says Amarjeet Maurya, senior research analyst, Angel Broking.

Armed with its innovative products strategy, Garware is looking to enter the defence sector. The company is making a pitch for its technical textile business — high altitude clothing and materials and other intelligence and security applications, for which Indian defence is fully dependent on imports.


‘We Will Touch Rs 1,000 Crore By 2017’
Shujaul Rehman, President and COO, Garware Wall Ropes.
COO Rehman talks about the strategies behind the company’s revival and its plans to achieve the next level of growth.
Q: What was the fresh strategy that reinvigorated the company?
A: Two key strategies that really lent fresh momentum to the company were the proper utilisation of innovative technologies in areas including agriculture and coated fabrics among others, and the rapid action to maximize market reach and share in the existing segments in both domestic and international markets such as the US and Europe. The innovation into agri-protection and aqua technologies helped achieve faster growth. Being a priority sector for India and many other countries, this area will continue growing rapidly. The other thing was cost control, by which we could reduce interest and material cost drastically in the last two to three years.
Q: Was your entry into new products investment-heavy?
A: No. That was the other advantage that we could positively leverage while looking at these segments. But in general, we spend about Rs 50 crore every year mainly on market development, research and innovation, and strengthening distribution and customer servicing, etc. But there was no abnormal capital expenditure.
Q: What is the next level of growth Garware Wall Ropes is aiming at?
A: The company has set a target of achieving Rs 1,000 crore in revenues by 2017, which looks comfortable at the current pace of growth. Also, there is plan to expand the business not just in existing segments but also in certain new areas such as applications in defense — this is already in the process. Also, there are geographies where bigger opportunities are available for the existing businesses. For example, we may look for growth in markets like Chile and African region through organic as well as inorganic ways.
Through development of products such as radon, aerostat balloon and camouflage nets among others, the company is aiming at a revenue of Rs 100 crore every year from the sector over the next five years. The products are currently in an advanced state of development and will be ready for delivery soon. “We are developing products for the defense sector, which we expect will replace imports from Europe,” says Rehman.
Innovative Farming.
Alternative farm enterprises is one of the most adapted strategies in the agriculture-bound economies worldwide. The trend has seen innovative methods of farming in both land and aqua regions. Naturally, this has opened up big market opportunities for companies like Garware.

While the company is betting big on the new businesses of modern agriculture, geo-synthetics along with the traditional fisheries segment, it is well aware that demand for aquaculture products is growing rapidly in the world markets.
“Aqua is one of the fast growing segments in both domestic and international market,” says Rehman.
According to him, foreign markets including Chile and the Mediterranean region are growing rapidly now, and GWRL may even look for inorganic opportunities along with expanding its existing network in these areas to drive growth.

Garware, which currently exports to some 75 countries,is one of the top five manufacturers of fishing nets in the world now. It mainly supplies nets to:-
The Indian Navy, Oil and Natural Gas Commission, the Coast Guard, Indian Oil Corporation and other government organisations.
It supplies sports nets to markets in the US, Canada, Europe, and Africa. The product range includes tennis, football, volleyball, handball, hockey, baseball and cricket. These nets are used in most professional leagues and tournaments worldwide, including the English Premier League, American Baseball League and the Irish Football League.
The company also manufactures farmer friendly products, including anti-bird nets, insect nets, shade nets, crop support nets, sericulture nets and anti-hail nets, among others.
Garware, which made news a few years ago for supplying fishing net weighing 47,000 kg to Norway’s Osterbris, the world’s largest high-tech fishing vessel, has won accolades of late including the Best Aquaculture Cage Net Manufacturer Award 2015 and a certificate of national appreciation for best innovation and performance in cage net manufacturing in India in October. This was the first time the company received such an accolade which came shortly after it was honored with the top exporter award for its performance in the fish netting export category for FY14-15 by the Plastics Export Promotion Council.
One hopes that these awards and recognition will prompt Garware Wall Ropes to contantly innovate and cast its nets wider across newer markets.
unni@businessworld.in; @unni_ch
(This story was published in BW | Businessworld Issue Dated 25-01-2016)
Posted by S K G Rao at 8:38 PM