In a major boost for UK manufacturing, a North West of England based textiles company is investing £5.8 million to bring cotton spinning back to its spiritual home in Greater Manchester. More than 100 new jobs will be created by the ambitious project, which will regenerate a former Victorian cotton mill and use cutting-edge technology to produce luxury yarn for domestic and global markets.
English Fine Cottons is investing £4.8 million of its own money in the project, £2 million of which is a loan from the Greater Manchester Combined Authority (GMCA) through its investment fund. A further £1 million has been awarded as a grant by the N Brown RGF6 Textile Growth Programme (TGP). 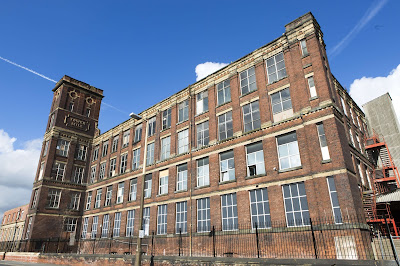 English Fine Cottons is investing £4.8 million of its own money in the project, £2 million of which is a loan from the Greater Manchester Combined Authority (GMCA) through its investment fund. A further £1 million has been awarded as a grant by the N Brown RGF6 Textile Growth Programme (TGP). The TGP grant announced yesterday, 2nd December 2015, is the largest ever single award from the programme. It means the new venture’s launch and growth plan for the next three years are fully funded. The company has already placed orders for key equipment and begun recruiting staff with a view to re-starting cotton spinning in the UK mid-2016.
Novel and unique.
Stories about traditional textiles manufacturers moving from the production of textiles for fashion and apparel to more lucrative technical textiles markets are many. However, the establishment of English Fine Cottons is novel and perhaps unique in that the owner of the company Culimeta-Saveguard, is a well established manufacturer of technical textiles for automotive and protective clothing applications, which now sees an opportunity in manufacturing textiles for apparel.
English Fine Cottons will base its new production facility in the refurbished Tower Mill in Dukinfield in Tameside, Greater Manchester. The facility will be the UK’s only cotton-spinning company – reviving this iconic trade more than 30 years after the last cotton mills closed in the 1980s.
Most luxurious yarns in the world.
The new mill will spin some of the most luxurious yarn in the world, using the finest raw materials from Barbados, India, the USA and Egypt. The yarn will be used in collections for the high-end fashion market in both woven fabrics and knits.

GMCA stands for Greater Manchester Combined Authority and represents ten neighbouring local councils (Bolton, Bury, Manchester, Oldham, Rochdale, Salford, Stockport, Tameside, Trafford and Wigan). Around 2.7m live in Greater Manchester's 500 square miles. It has an economy bigger than Wales.
The ten councils have worked together voluntarily for many years on issues that affect everyone in the region, like transport, regeneration, and attracting investment. In 2011 the relationship was made official with the formation of the Greater Manchester Combined Authority (GMCA).
The GMCA has formal powers and responsibilities set out in law. It has its own budget and employs staff to run the organisation and to work full-time on its objectives.
The GMCA offers loans at commercial rates to businesses and organisations to fund schemes that will boost local employment, improve people's skills and contribute to the region's economic growth.
Alliance Project.
The Alliance Project, based at New Economy, was established to examine the potential for repatriating textiles manufacturing to the UK. The team led and delivered one of the largest pieces of research, with both industry and retailers, to understand the opportunities for growth in the UK’s textiles sector, and the barriers that would prevent the sector realising its true growth potential. The work was commissioned by Lord David Alliance and Greater Manchester Combined Authority (GMCA) with the support of The Greater Manchester Local Enterprise Partnership and Government through the Department for Business, Innovation and Skills.
Further information.
Culimeta-Savegaurd.
http://www.innovationintextiles.com/king-cotton-comes-home-manchester-company-invests-58m-to-bring-cotton-spinning-back-to-britain/#sthash.r1MZ65ao.dpuf
Posted by S K G Rao at 9:32 PM