German dyeing machinery specialist, Thies GmbH & Co KG, installed the ten dyeing machines and a horizontal pressure dryer in record time, in addition to designing the lay-out and specifications for all ancillary equipment at the new plant.

Lean and efficient
According to Thies it stands as a shining example of a lean and efficient 21st Century operation, run by just six employees already achieving output of 25 tons of dyed yarn a week – and with virtually zero waste. 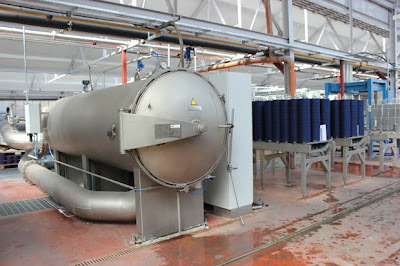 Huddersfield is situated at the convergence of the rivers Colne and Holme, where centuries ago it was discovered that the water – flowing down from the Millstone Grit Pennine hills – provides excellent results for washing raw wool. Fine woollen and worsted manufacturing became a Huddersfield tradition, with skills and expertise handed down from generation-to-generation.

The boom period for UK textiles in the late 19th and early 20th Century made many industrialists very wealthy, as is still evidenced today by some of the grand architecture of Huddersfield.
Unfortunately, many of the mills which once clothed the world now stand silent or have been turned into apartments and offices.

Niche businesses
Textile companies remaining in this region are specialized niche businesses operating in very demanding markets. One such company is contract furnishing fabrics specialist Camira Fabrics, which has set up the new £2 million Park Valley operation in a joint venture with Holmfirth Dyers.

Camira, which is headquartered in nearby Mirfield, has a weaving mill in Huddersfield and a second in Lithuania, employing a total of 450 people at the two sites. 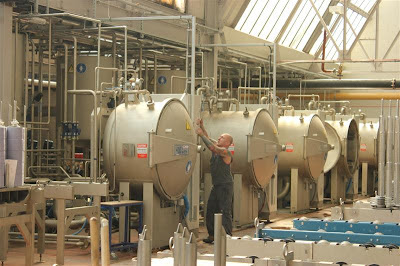 As the supplier of Holdsworth-branded fabrics to the transportation industry, its products are supplied for bus, coach and train upholstery across the world. Customers include Arriva, Transport for London, the Paris Metro, London Underground and First Group.

Camira also produces extensive collections for office furniture. For both of these markets, product specification is extremely high, particularly in respect of continuity and reproducibility of product with high fastness requirements being met by the new Thies units.

In deciding to bring its yarn package dyeing in-house, Camira identified the Park Valley site as highly suitable. Having been a working mill for decades, most recently as part of Parkland Textiles, it has in recent years been used for the storage of caravans.

“A key deciding factor was that the mill already had the necessary licences and permits in place to run a dyeing operation in respect of water and effluent,” said MD Philip Brearley. “This is extremely important because in this region the regulations in force are extremely high, however clean the processing may be – and this is a very advanced operation in that respect.”

Designed from scratch
Mike Exley of Advanced Dyeing Solutions, which carried out the installation and also provides technical support, spares and service for Thies machines in the UK, stressed the immediate benefits of the new plant in being designed and installed from scratch.

“In mills that have been built up over many years – as the majority in the UK have – it’s very rare to find machines that are the same, and they can also often be from different suppliers,” he said. “This obviously makes it much more difficult to achieve any kind of standardization. One of the key features of the latest Thies systems is the quality of their pumps in providing excellent liquor flow and control. This ensures that every machine is working with the same liquor ratio and at the same heating and cooling rates, for maximum standardization.” 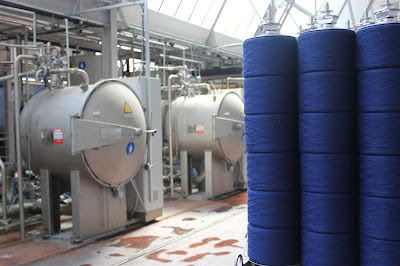 All of the parameters of the Thies dyeing units, from the Quattro lab sampling unit to the largest two eco-Bloc machines with capacities of 840kg – and 1,680kg when operating in ‘master and slave’ linked mode from a single control unit – are standard, so whatever the chemical formula, high efficiency and reproducibility from machine to machine is guaranteed, Thies says.

PC controllers ensure the material flow and all machine functions are constantly monitored and regulated.

Inside the eco-Bloc units, the heat exchanger is strategically positioned in the circulation system with a correspondingly positive effect on the liquor ratio, and to avoid the need for an expansion tank while compensating for liquor expansion and shading corrections, the kier uses an internal air pad.

The integrated flow diverter directly connected to the circulation pump allows for liquor flow reversal, with rapid liquor circulation optimising all stages of the dyeing process.

Flexibility.
In addition, this plant is very flexible and the bigger machines are modular, with the ability to operate, say two of their four modules, or just load 50% of the packages, again with complete reproducibility guaranteed,” Mr Exley said. “The package spindles are designed to be completely sealed, whether with full or half loads.”

The total of seven horizontal and two vertical Thies dyeing machines are currently processing 85/15 blend wool/nylon yarns for Camira and the carriers are currently being supplied that will soon see the plant also processing polyester yarns.

Holmfirth Dyers already carries out the piece dyeing of Camira’s plain fabrics, Mr Brearley explained, so it was natural for the two companies to come together for the new Park Valley operation.

“Bringing the package dyeing in-house gives Camira much greater control over its quality and has eliminated any possible time delays,” he said. “Not only is this improving our responsiveness to customers, but it’s also speeded up the time from initial sampling to bulk production. And thanks to the Thies machines, we are achieving the highest quality level in respect of evenness and the elimination of any shade variation. We’ve seen an immediate fall in customer complaints as a result.”

Pharma standard.
Park Valley has also obtained a pharmaceutical standard recipe preparation booth to achieve specifications that are much higher than actually required.

“We’re working to extremely fine tolerances, with variations of less than 0.2g per 16kg batch in formulation and in dispensing we’re already achieving a right first time rate of 98 %,” Mr Brearley said.

As mentioned, the plant is also an extremely clean operation, with all water consumed returned and an energy-efficient hot water boiler with a recovery unit for its reuse in place. Drying is by hot air, rather than the more standard RF, with further benefits in respect of resource efficiency, and all of the pallets and packaging in which the yarn packages are delivered are recycled.

The only thing that really exits from the plant is the colour on the packages that came in.

“Thies and their agents Advanced Dyeing Solutions really did an excellent job in getting the plant up and running in record time,” Mr Brearley concluded.

“I joined Camira last January to begin planning and the company really did a lot of work in reviewing all historical data and realistically calculating the required output for future projected sales. We signed the contract with Thies last July and by January this year the first two machines were in full production – even as the other machines were still being installed. We’ve been achieving the high quality we were after from the outset.” 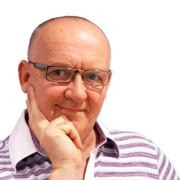 http://www.innovationintextiles.com/dryeing-finishing-printing/dyeing-to-tight-tolerances-at-park-valley/
Posted by S K G Rao at 10:55 AM