Sigvaris, through its Athletic Recovery line of socks, already has strategic partnerships in place with established endurance sports organizations in North America, such as the Road Runners Club of America (RRCA), USProTri and the Cross Country Canada Olympic Team (CCC-skiing). 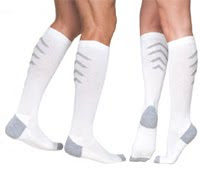 Sigvaris introduced the Athletic Recovery, an active therapy graduated compression sock designed to boost endurance and improve athletic recovery and peak performance last autumn. The company says that Athletic Recovery helps to flush out the lactic acids built up in the leg muscles during exercise, as well as relieve tired, aching legs and exercise-induced muscle soreness.

Sigvaris explains that Athletic Recovery is made of Optimer’s drirelease yarns to accelerate the water release rate of wet fabric, and includes FreshGuard to eliminate odours by blocking odour-causing sebaceous body oils from attaching to the fabric. Drirelease is a patented, intimate blend of synthetic (hydrophobic) and natural (hydrophilic) fibres that accelerates the water release rate of wet fabric. Optimer says that rather than spreading the moisture across the surface of the fabric, drirelease actually pushes it to the outside of a garment, releasing water and perspiration faster than any other performance fabric on the market. drirelease includes the added benefit of FreshGuard, an odour neutralizer embedded in all drirelease fabrics, which Optimer claims virtually eliminates odour without using harmful chemicals and won’t wash out.

The company created Athletic Recovery for competitive athletes and ‘weekend warriors’ as compression garments have become highly visible in many major sports. Whether it’s during the actual event, after the event, or even while travelling, athletes are making graduated compression socks part of their everyday attire, says Sigvaris.

"As the global leader of graduated compression socks, we are very excited to be entering this new and emerging market segment of athletic recovery. Sigvaris brings unequalled quality and expertise to a new demographic of competitive athletes and weekend warriors, many of whom may have been previously unfamiliar with graduated compression garments. The Athletic Recovery line is the first Sigvaris sock in the new Active Therapy series, with several additional products to be introduced in 2010", said Jonas Thelin, Director of Marketing, Sigvaris North America.